From Ridley to Ragley 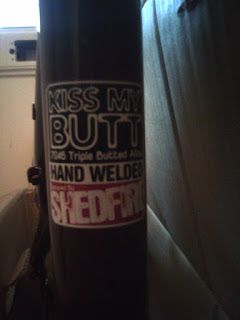 I've been out of the saddle for over a month. Looking at a pile of new Capagnolo components on my desk.

It all started with buying a frame for my Girlfriends birthday. Getting rid of her MTB, and trying to get something specifically 'cross'. I ended up getting her a Paul Milnes frame - a lovely man from Bradford who sells cheap cross stuff via Ebay. The idea was to put the components from my Ridley onto this frame, and upgrade some of mine. The Paul Milnes is an amazing bargain. He'll sell you a frame and full carbon fork for £265, you can buy the same bike branded as Columbus for £330 or you can buy it as an Empella for £600 - it's the same bike, personally the pure white of the Paul Milnes looks way better than the others.

So that was the plan. I built up the Paul Milnes and she was off...I fitted some new Kinesis forks to my Ridley - with a view to raising my bars a touch. Raised the bars, and found I needed the saddle up a touch...oh, it won't move...and so began weeks of scratching my head, making tools, making spreadsheets etc. My carbon seatpost had bonded to my aluminium seat-tube. I tried brute force, WD40, cutting the seatpost from inside to out al la Sheldon Brown. I tried drilling, reaming. I eventually took up to the engineering block at Uni. The 'metal' guys didn't want to touch it without tungsten-carbide or diamond tools. The composite guy however was happy to put it in his big kiln to see of thermal expansion would do the trick...it didn't. He did find that heating to 130 degrees turn the resin in the carbon fibre to mush for about 10 minutes, allowing you to gouge out chunks of it.

This took a couple of weeks, and given the age of the frame I decided I had to stump up for a replacement. So I looked around and decided that a Paul Milnes was probably the best value around - It seemed a bit twee for both of us to have the same frame, but I'd get over that. When it arrived, I offered up the bottom bracket - a Campagnolo UtraTorque. Campagnolo are very proud of the small 'Q' factor of these cranks - the distance between the pedals. They don't like frames with heavily manipulated chainstays though - like the Milnes/Empella. Luckily Paul Milnes was a gent about taking the frame back. About a week later I went to a local cyclocross meet. One of the guys there was just starting a business importing A:XUS bikes from Germany, I sat on a couple - they are sweet. Tight angles, extremely light triple butted frame - they had one I could have for £499. The only other thing I had on the horizon was a 2009 Ridley Crosswind from a German website for £430. I was just about to press 'buy' on the Ridley, when I saw a shop soiled Ragley for £250 - They'd been on my list, but I thought they were expensive for what they were at £450. After a bit of research I decided to go for it.

So I've just built it up, and my initial impressions are that it's being undersold. It is triple butted, the angles are clever, and the whole frame has been cleverly hydo-formed. The UltraTorque crank fits too...
Posted by Domejunky