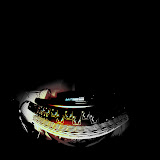 What a nightmare. Looking for a new audio interface to drive the 10.1 system at work.

To do this I need to use ADAT + 1 S/PDIF - all the analogue inputs are taken on the RMEs at work.

I'd been playing with the MOTU and a version of FFADO built from the latest trunk in subversion - with some success. I say some - the digital clock in the MOTU seems very flaky and easy to upset. This is the second one I've had - and both were the same, even under Mac OS X and XP. I've tried quite a few firewire cards too. Between the machines I have here I had a Via, 2 Agere, 2 Ricoh - so I went out and bought an ExpressCard one that had a Ti chipset. For the record (it took me a fair bit of research) the Cardbus and ExpressCard firewire devices that maplin sell are based on Via AND Ti chipsets - you need to look at the model numbers to find out which - mine has a number of CE-T08-2210......... - the important thing is the 'T' the Via ones have a 'V'. The new card did make some difference, but as soon as I started and 3D process I'd get xruns and gaps in the audio, or jack would crash.

So I thought I'd work backwards from the ALSA, FFADO lists of compatible devices - I need 4 mic preamps with phantom power for the TetraMic; 4 balanced outs for a quad setup at home (in my bedroom); and S/PDIF and ADAT for driving 10 speakers at work. I don't know if that was a lot to ask, it's not so easy to find. I decided I'd settle for 2 out of three and forget about the preamps - I could also nurse the MOTU for that.

My mate Matt (who is a gigging, signed musician using PureData, Ardour and Supercollider under Linux) uses an RME Multiface + ExpressCard. I rate RME, and was aware of their solid Linux support. So that was the main contender really - the only problem is that they're about £750 in the UK at the moment - his cost him around £300 some time ago, so that's easy for him to say.

Then I spotted the t.c. electronics Konnekt 24D on a database of devices as having ADAT. It is based on t.c. electronics DICE chipset. I did a bit more digging and came up with a few more devices based on the same chipset, notably the Focusrite Saffire Pro40. I noticed on the FFADO blog, that support for the DICE based devices was coming along, and that Focusrite were being Linux freindly. Even donating a few interfaces to the FFADO project - I sat around in the FFADO IRC channel for a bit, and discovered that DICE support was actually already there - just the GUIs to the devices features weren't working. I was left with a dilema - swallow the £750, and be able to crack on the next day or buy a DICE based device and maybe be in for months of hacking and instability. In the process I found a B-Stock Konnekt 24D for £190 - "I can live with that" I thought - and went off to order one - I thought at that price I'd have to take a plunge.

When it turned up, it transpired to be a really nice device. A massive improvement in sound quality compared to the MOTU. It turned out to be pretty robust too when running with FFADO - suddenly I went hours without restarting JACK. I was doing meaningful work in CLAM! I quickly modified all my CLAM projects from quad to 10.0 and ran up to my dome to see if it would work...

...It didn't - I got audio into the RMEs, but accompanied with an awful 'I can't sync' Geigger counter noise - through every channel...ouch! I methodically tried all sorts of syncing options. When I got the interface home, I tried it with the MOTU - worked like magic. Back in the dome I tried the MOTU with the RMEs just to check I hadn't been dreaming when I set it up before, worked like a charm. What was more, I could daisy chain the ADAT from the Konnekt 24D to the MOTU to the RMEs fine. I searched the RME and t.c. electronics support forums, sent emails to the support departments with practically no feed back. I sent the interface back and considered my options.

Returning the previous device had been pretty easy with Digital Village's 7 day no quibble - so I figured that maybe a should give the Saffire Pro 40 a go, and just return it, and stump up for a Multiface if it didn't work. I wasn't totally convinced, so in a last rash attempt to get this solved, I phoned up Focusrite - they're in the UK, I should at least try to take advantage of that. I got put through to a testing engineer, who spoke to me quite honestly for 30 minutes about the DICE chipsets, ADAT implementation. Most importantly he said they would have repeated the Saffire Pro 40 --> ADAT --> RME combination in their labs and with their Beta testers. Seemed pretty fair to me so I placed the order...

...It arrived today! It worked with FFADO after a firmware update - I had to boot it up attached to a Mac to do this, and to set the routing in their mixing GUI. Back into Linux and solid as a rock - same liquid sound as the Konnekt -so maybe it is the Jitter suppression that everybody goes on about. I took it to the dome and plugged it into the RMEs, and out popped 10 channels of lovely clean audio - sweet! I couldn't believe it was so easy - I've had it in stress test mode all evening - listening to Ambisonic recordings, and pumping the audio through the ADAT out connected directly back into the ADAT in, 4 times! It's a good was to test, as you don't need 10 monitors to hear any artifacts. It has a killer feature for multichannel work - any combination of the analogue outputs can be assigigned to the volume knob on the front.

So I'm a happy guy now, and a new Focusrite fan...but it made me think, when did I last buy something English (even though it's made in China).